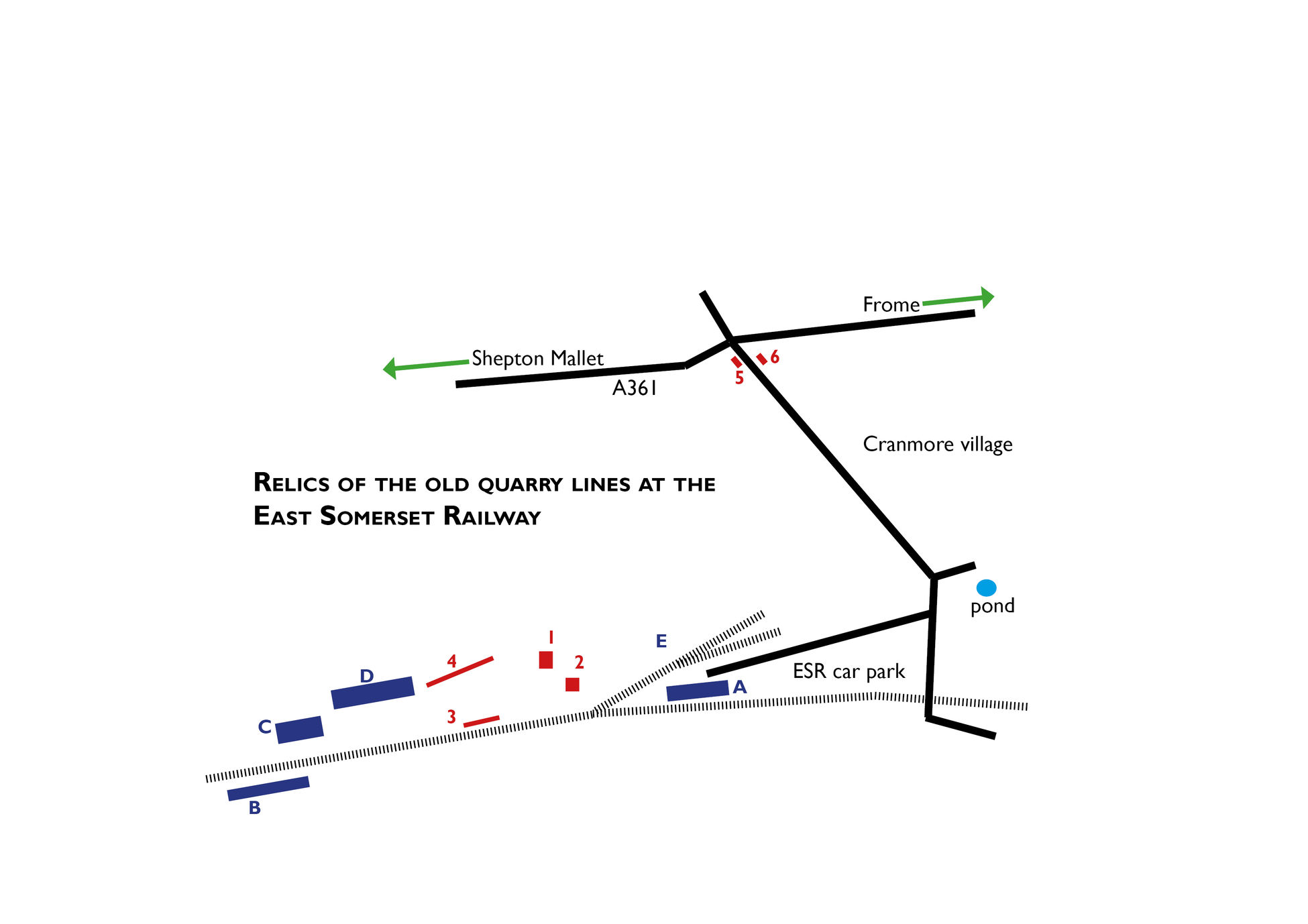 THE QUARRY LINE FROM CRANMORE

Nearly everyone arrives at our station via the crossroads on the A361 but how many know about the line that ran underneath it? This went through a tunnel, the arch of which was exposed briefly about twelve years ago.  Fifty yards down the lane you can still see the parapets for a railway bridge.

The tunnel and bridge related to the quarry line that ran north from the East Somerset Railway. The former shows the alignment of the original route, opened by 1871, a tramway on a two-foot gauge that resurfaced north of the crossroads and continued up the east side of the road to Waterlip Quarry. In the other direction it went downhill, across the fields to meet the ESR in the tanker sidings and at the high wall on the path from our station along to the engine shed. Gravity ensured the wagons arrived at Cranmore and horses pulled them back uphill. There was a crushing plant at Cranmore and the processed stone was loaded onto trucks in a siding where the above path now passes. Then that stone was transported out over the main railway system.

There were changes in about 1926 when the line became dual gauge and steam locos took over the haulage. The line was extended to Moons Hill Quarry and a branch went up to Downhead Quarry (beyond Cranmore Tower), though that quarry closed almost immediately. Parts of the quarry line were realigned and a new tunnel was cut under the A361 to the east of the old one. The bridge and parapets were built then, too and the line was realigned behind the bungalows along the road to Waterlip. The line became standard gauge and there was even an engine shed near the crushing plant. What was being quarried? Limestone from Waterlip but andesite (igneous in origin and similar to basalt) from Moons Hill and Downhead.

Why ‘tanker sidings’? When the crushed andesite was mixed with bitumen it produced a good surfacing material like tarmac. The crushers were moved back to the quarries in the 1930s (contributing to the decline of Cranmore station) but the line remained in use until 1946, when Waterlip quarry closed. Bitumen was still delivered to the station in tanker wagons. These were brought from beyond Witham, and reversed into these sidings. There are still traces of the pipework in the undergrowth that was used to warm the bitumen. The warmed material was transported by lorry to the quarries, a procedure that continued until 1985. Moons Hill remains open but all the stone is distributed by road.

There is other evidence of the quarry line and relevant photographs are being added to our website. The old engine shed has been converted into holiday accommodation. There are the remains of old buildings near the high wall. The alignment of the embankment east of the carriage shed is still visible beyond the garden and trees. Traces of the original fencing can be seen going towards Waterlip and the embankment for the branch round to Downhead is prominent amidst the rough pasture north of Long Cross on the road down to Moons Hill. Also, Cranmore Signal Box seems far too large for its location but this was necessary because of the extra sidings for the crushing plant and for tanker sidings. At its peak, up to 100 trucks of stone a day were leaving Cranmore daily and the trains all had to be managed somehow.

Now Cranmore is quiet, except when we are running trains but you can imagine that it was all very different several decades ago.

This is a brief and simplified summary and readers should refer to ‘Steaming through the Cheddar Valley (by Derek Phillips), ‘The East Somerset and Cheddar Valley Railways’ (Richard Harman) and ‘Quarry Faces’ (Robin Thomas) to learn the full story.

You can now rebook your Cream Tea, Sparkling Afternoon Tea and Sunday Lunch.