The Mendip Traction & Rolling Stock Group are a group of volunteers who run the Heritage Diesel Multiple Unit on certain days throughout the ESR running season.  Following is information about the group and their stock.

The Mendip Traction & Rolling Stock Group (MT&RSG) are the owners and operators of Class 108 Diesel Multiple Unit (DMU) L231. The unit arrived at the ESR in October 2013, having previously been based at the S&D Railway Heritage Trust site nearby. It has been running a passenger service on specific dates throughout the ESR running season since the summer of 2014 but it is very much an ongoing restoration project for the group.

The owning Group is formed of several career railway staff including Drivers, Guards and Engineers, plus other enthusiasts who have an interest in the upkeep of the unit. We have decided to incorporate several modern features into the unit's rebuild and prefer to use the term ‘a sympathetic refurbishment’, rather than ‘a restoration’, as we upgrade it while still keeping the feel of a traditional 1960's British Rail train.

The set is formed of two vehicles:

They are both BR ‘Derby Lightweight’ vehicles, so called due to their aluminium construction (the cab and gangway ends are steel). With the implementation of BR's computerised numbering system (TOPS – Total Operating Processing System) in the 1970's they gained the classification of Class 108, in series with other DMU types which were all in the 100-129 range.

The 108's were designed for use on short to medium distance cross country routes, rather than suburban work and therefore had only two bodyside doors per coach. When new they had luxuries such as window blinds, although these were removed later in their careers but we have found some of the parts still fitted during interior rebuild work!

51909 was built to Lot.30601, diagram DQ213 by BR at Derby in April 1960. It weighs 29 tons and is 58ft long, with a Guards/Luggage area and Second Class seating. Underneath the chassis are two B.U.T (AEC / Leyland) 680 engines delivering 150hp apiece. Each engine drives one axle on the adjacent bogie through a mechanical transmission, consisting of a 4 speed epicyclic gearbox and a final drive on the bogie. The gearbox is linked to the final drive by a large cardan shaft which has universal joints at each end and can extend on a splined shaft. Saloon heating is provided by a diesel fuelled Smiths heater, while the Driver’s heater uses waste engine heat from the cooling system.

Quick release vacuum brakes are fitted using a twin pipe system, rather than the single pipe system found on steam/diesel locomotives, as DMU's were expected to make fairly frequent but brief stops. The maximum speed of virtually all DMU cars was 70mph.

In line with most other DMU's of their time, the 108's were fitted with multiple working (Blue Square code) which allowed up to 12 cars (6 powered, plus 6 trailer) to work together under the control of a single Driver.

51909 was originally based at Toton in Nottinghamshire before transferring to Allerton (Liverpool), where it spent the whole of the 1970's, but by the late 1980's it was based at Bletchley (Buckinghamshire). 51909 was refurbished in 1979, when it had fluorescent lighting and a modernised interior fitted.

54271 (56271 when built but re-numbered upon full implementation of the TOPS system in 1983) was built to Lot.30499, diagram DS310 at Derby in February 1960. It weighs 22t and is also 58ft long and has both First and Second Class seating plus a lavatory. This vehicle is unpowered but has a cab from which a powered vehicle of the same coupling restriction (Blue Square) can be controlled.

54271 was the first of its type to be built to a revised design with a different cab layout. The destination blind is positioned in the centre windscreen rather than in the roof dome, which sports a 4 digit headcode box where the train reporting number (Headcode) could be displayed. The earlier design had only two digits in a box below the middle windscreen. This vehicle was never refurbished and retained Tungsten light fittings. When new, it was delivered to Ryecroft Depot, Walsall but transferred to Allerton by 1970, where it remained until the 1980's when it transferred to Bletchley.

The two vehicles would have operated together during their time on Merseyside but were not paired together as a set until moving to Bletchley, where one of our members remembers working on them in BR service!

The two became set L231 and remained in traffic until July 1993, finally wearing the colourful Network South East livery of Blue and White, with red and grey stripes. Once withdrawn, they were stored by BR for a while before moving to secure storage at MOD Long Marston in Warwickshire. They remained here for a number of years, with the weather taking its toll, before purchase for preservation.

When the group first started work the vehicles were basically a kit of parts, the interiors were stripped, glass was smashed and components were missing. Thousands of hours (and tens of thousands of pounds!) later we have a fully functional unit. There are a host of technical improvements. plus a refitted interior with new panelling, reupholstered seats, powder coated frames, new floors, LED lighting (to save battery drain), Driver/Guard communication phones and a battery charge feed to the trailer car from the power car (we don’t run fast or long enough for the dynamo to charge the batteries in 54271).

In spring 2018 we fitted two brand new cardan shafts to 51909. Previously we have contracted Cranmore Traincare and Maintenance Services for repairs.  They fixed the roofs of both cars and repainted them using a very high quality flexible industrial coating, as well as rebuilding both gangway ends, fitted brand new gangways manufactured by South Devon Railway Engineering and laid new floor covering throughout the passenger saloons. During winter of 2018/19, 54271 will be visiting their workshop for a cab rebuild and full repaint. 51909 will follow a year later, once funds and time permit.

During 2018 we have gutted the Guards Van area and rebuilt it from the chassis up. The chassis was re-rivetted, new floors laid, a new bulkhead built, lighting reconfigured, a seat base built, store cupboards built, wiring modifications made, external doors repaired, a full repaint and once the new floor covering has been laid we’ll fit three tip up seats to complete the area which will be a nice bright place for families with pushchairs or wheelchair users to sit.

There is still much to do and we’ll be working on the unit into the 2020's but please do come along for a ride when we’re in service. We look forward to seeing you on board and hope to call the ESR ‘home’ for many years to come!

If you want to follow progress on the unit please visit our The Mendip Traction & Rolling Stock Group facebook page. 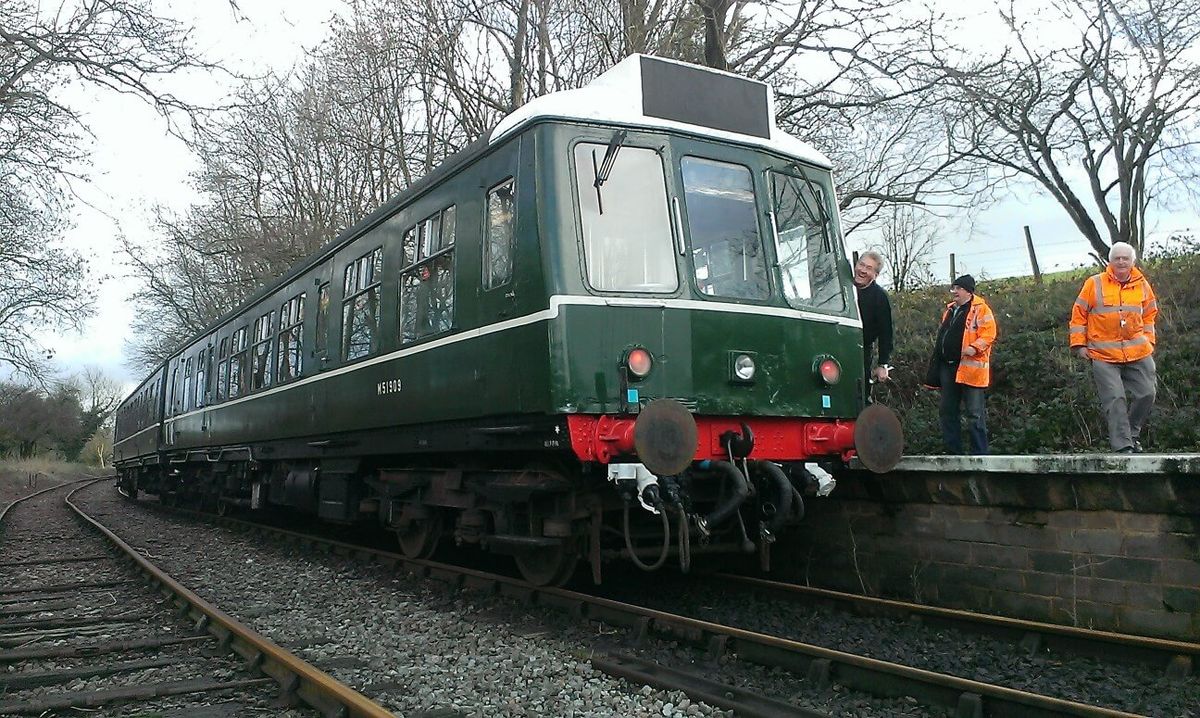