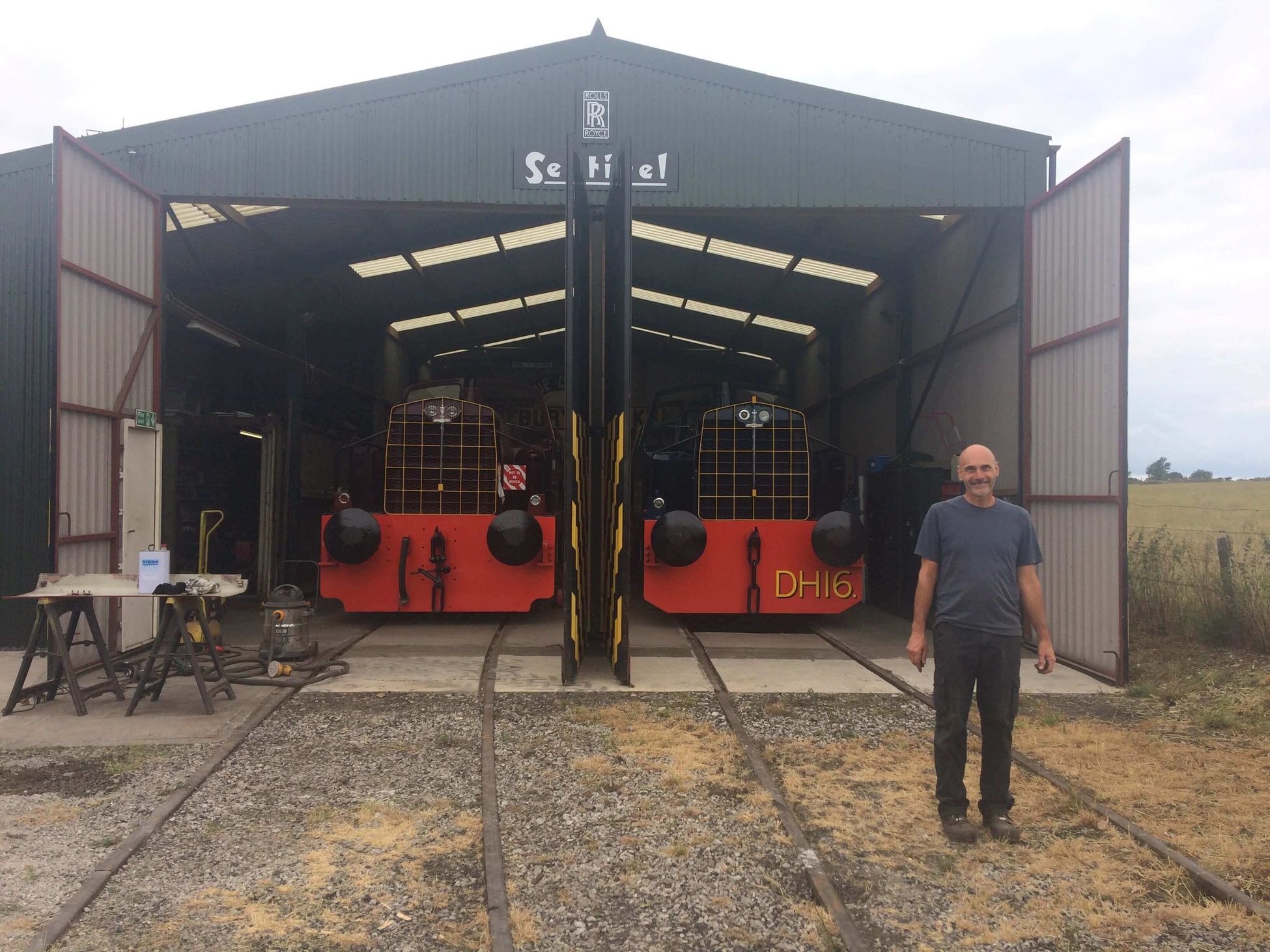 Another group of volunteers at the ESR have a love of Sentinel Diesel Shunters.  They built and opened their own shed adjacent to our Engine Shed and Workshop.  You can usually find Colin Girle passionately restoring his Sentinels and he is happy to welcome visitors to the shed to have a look around when he is working.  The diesels are facinating locomotives and help the ESR greatly by moving stock around the ESR site, assisting the working parties and for the Permanent Way trains.

This small group was formed in November 2005 to restore recently acquired 0-4-0 Sentinel locomotive 10165 ‘Joan’ but their collection has since expanded.  0-4-0 Sentinel 10199 was kindly donated by Esso Petroleum Ltd, then 0-6-0 Sentinel 10221 by Lafarge Cement UK and Sentinel 10175 DH16 joined the collection from its previous base at the West Somerset Railway in 2015.  They also kindly assist the ESR with the maintenance of our Sentinel 10218.  They constructed a two road shed at Cranmore to house the collection, which was completed in late 2013. 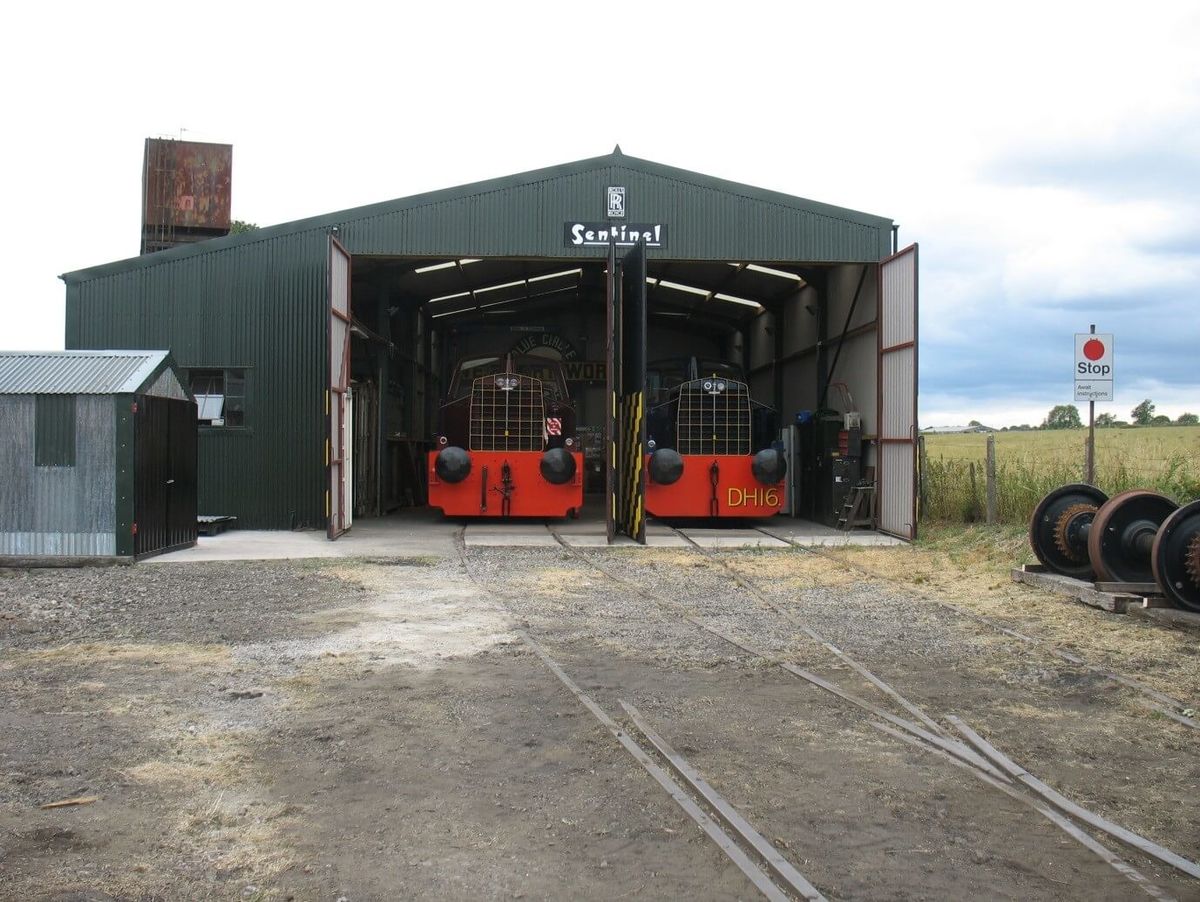 Built in 1963, 10165 was a lightweight version of the 40 ton 0-4-0 Side Rod (SR) drive Sentinel diesel.  As with all Sentinels the loco is powered by a Rolls Royce C Range diesel engine, in this case the 311 hp 16.2 litre 8 cylinder supercharged version.  Power is transmitted through a Rolls Royce Twin Disc torque converter to a Self Changing Gears RF11 reduction and reversing gearbox on the rear axle, with the wheels connected by side rods.

Initially 10165 was used by Rolls Royce Sentinel as a demonstration loco but was sold in July 1964 to the Oxfordshire Ironstone Company of Banbury as part of an order for this and ten new locomotives.  10165 was refurbished and travelled to Banbury in September of that year, carrying the name 'Joan' from her steam predecessor.  She formed part of a total fleet of 13 locomotives, 8 were 30 ton 0-4-0SR’s with girls names for iron ore quarry work around the company’s Wroxton base and 5 were standard 40 ton 0-4-0SR's for working the 5 mile branch to the main line at Banbury.

When the OI Company system closed in 1968, Joan was moved to Stewarts and Lloyds iron ore quarry at Harlaxton near Grantham, gaining the plant No.8411/07.  She worked there until that too closed in 1974.

She then moved with former OI Company sister 'Maud' (pictured together below) to BSC Stainless Division’s Panteg works near Pontypool in South Wales.  The two locomotives soldiered on until rail traffic ceased at the works in 1989, then both rather battered Sentinels were bought for preservation at the Dean Forest Railway.  This proved to be short lived as the locos soon became disused and vandalised, languishing at various sites on the DFR and later at the former MOD site at Long Marston.

In 2005 the locomotive was bought and moved to Cranmore, where the mammoth task of restoration began.  This has turned into a major rebuild with the loco being stripped down to its frames and wheels, plus all damage and corrosion painstakingly repaired.  The control desk was also rebuilt and the locomotive completely rewired.  The restoration was finally completed in July 2017 and 10165 has been turned out in original Oxfordshire Ironstone Company maroon livery with yellow and black lining and red buffer beams, side rods and fly cranks, complete with new 'JOAN' nameplates.

10199 represents the most numerous Sentinel type, the 34 ton 0-4-0 Chain Drive (CD) or Class LB.  119 of these locomotives were built, 10199 being one of four for Esso Petroleum Ltd.  One each went to Hull, Trafford Park and 10199 to Bowling near Glasgow.  The fourth went to Marseille in the south of France and was later joined by an 0-6-0SR.  10199 arrived in Glasgow in November 1964 and worked there until moving to the company’s Plymouth bitumen plant in 1995.  The locomotive was soon joined by a larger Hudswell Clarke and was kept as standby but little used.  On a visit to the plant in 2007 the locomotive was found disused and suffering from the salty atmosphere.  A tentative enquiry to Esso was made and to the group's delight they offered to donate the locomotive.

10199 was moved to Cranmore in July 2007 and with a set of batteries connected she fired up first turn!  After a few weeks work the locomotive moved again under her own power and work was began on the restoration.  This was completed in about 9 months, with the locomotive turned out in red livery with yellow and black lining.  As it had never carried any identity, the name 'Cattewater' was chosen after the stretch of water at Cattedown Wharf where the locomotive spent her last years in industry at Plymouth.

10199 is fitted with the 12.7 litre six cylinder 230hp supercharged C6 engine with Twin Disc transmission.  Sprockets on the RF11 gearbox drive the axles via duplex roller chains, each link being 2½  inches long.  In 2014 The loco suffered engine damage while in service and was sidelined until 'Joan' was completed.  In July 2017 work started in earnest to restore 10199 to working order.  The engine was stripped down and the defective No.3 piston and liner were replaced and the two cylinder heads refurbished.  The engine has been run again and all is now well.  All six brake adjusters were seized with rust so they were removed, freed up, painted and replaced.  The brake blocks were also renewed.  The air tank was taken out, cleaned and painted then tested before refitting and several air corroded air pipes were renewed.  Attention can now focus on the bodywork, which will be de-rusted and treated before a full repaint.  New glazing rubbers and front windscreens will also be fitted and we hope to complete this early in 2019.

Constructed between 1887 and 1894, the Manchester Ship Canal stretched for over 40 miles between Manchester docks and the Mersey estuary west of Ellesmere Port.  The Manchester Ship Canal Railway was once Britain’s largest private railways with over 230 miles of track. The system ran from the Manchester docks complex alongside the Canal, serving various industries as far as Warrington.  A further line ran west from Warrington for 5 miles and a separate system operated around Ellesmere Port.  Dieselisation of the railway started in 1959 with two Hudswell Clarke diesel electric locomotives, followed by 15 more diesel mechanical locomotives from this company. 18 of the 230 hp 0-4-0 Rolls Royce Sentinels were ordered, with the first two arriving in 1964 and in subsequent batches to 1966.  Four 0-6-0 Sentinels were also ordered for the Ellesmere Port system.

The first Sentinel batch included DH16, being delivered new on 8th February 1964 (Works No.10175) in the company of DH15.  By 1971 however, the docks and its railway system were in decline, with DH15 and DH16 being the first diesels to be disposed of.  The two Sentinels found further work with Bowaters Paper Mill along the canal at Ellesmere Port.  When rail traffic ceased there in 1981, DH16 was donated to the fledgling East Lancashire Railway, putting in sterling service on the reconstruction of their line.  By 1999 the locomotive had fallen in to disuse but was purchased at scrap price (just £700 at the time) and moved south to Merehead Quarry in Somerset.  Restoration took place there for the next 18 months and DH16, now resplendent in original Oxford blue livery, moved to its new home at Williton on the West Somerset Railway in 2001.  From then DH16 was employed as depot pilot at the Diesel and Electric Group’s base.  In 2004 DH16 paid a visit to the Bristol Harbour Railway to celebrate its 40th birthday, with many photos taken of the locomotive back in a dockside environment.  In 2011 DH16 was given a repaint and general repair including a top end engine overhaul, new brake blocks and a new set of drive chains.

In June 2015 the locomotive was invited to a Sentinel Centenary Event by Caterpillar Remanufacturing at the former Rolls Royce factory in Shrewsbury.  Based on the other side of the railway from the site of the Sentinel Works, an intensive month long full repaint was carried out prior to the event.  On its return from Shrewsbury, DH16 joined the collection at Cranmore and has since proved a very useful back up to the ESR’s Sentinel PBA 39, as well as for other general shunting and Permanent Way work.

PBA 42 was new to the Port of Bristol Authority’s Avonmouth docks in July 1965 (works No.10221) and was the last of a fleet of 8 Sentinel locomotives (PBA 34-42).  Rail traffic ceased in 1983 and the locomotive was sold through Sparrows Equipment Sales in 1985, eventually ending up at the Rover Plant in Longbridge, after an overhaul including fitting with train air brakes.  In 1999, 10221 moved to Blue Circle Cement’s Westbury works, later gaining an unusual livery and the name ‘Eric’ as a result of a competition to design it by local primary school children.  In 2005 the locomotive suffered a severe electrical fire, burning out all the wiring and damaging the control desk and air control system.  The other resident locomotive at Westbury had a transmission failure about this time too, so 10221’s unit was robbed to replace it.  The air brake donkey engine compressor was also taken off for the other locomotive and 10221 was dumped at the end of the sidings for many months.  A visit was arranged, just out of curiosity to see what condition it was in and luckily Lafarge Cement (successors to Blue Circle) offered to donate the locomotive.  Although in bit of a sorry state, it definitely had potential and the group were very happy to accept it.  Lafarge Cement up in Dunbar very kindly donated a large quantity of spares from scrap locomotives and from their stores, which contains most of what will be needed for 10221’s eventual restoration and to keep the two Chain Drive locos working too.  The restoration on 10221 will begin once 10199 is completed.

10221 has the 8 cylinder 311hp engine, twin disc transmission and RF11 final drive (with the drive to the centre axle) and weighs in at 48 tons.  The second four of the PBA locomotives unusually have rubber suspension, PBA 42 being one of these.

Also at Cranmore is the privately owned 10218 'PBA 39', sister of Port of Bristol Sentinel PBA 42.  It was built in May 1965 and overall approximately 90 of these 0-6-0SR class LBS were built.  This locomtive is currently in working order and was restored in 2011 to its original Oxford Blue livery, yellow and black lining, with red and white buffer beams (PBA 42 is due to be restored to the later style, with yellow and black chevron buffer beams and skirts).  It was one of the last operational locomotives at Avonmouth Docks, going from there into preservation at the Dean Forest Railway in 1984, before coming to Cranmore in 1999.